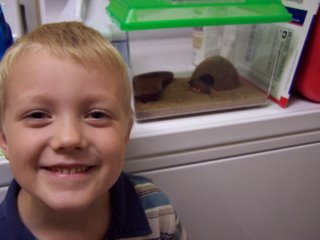 Andrew is our resident entemologist. Behind him, in the terrarium, is his pet cockroach, Hisser. Hisser is not just any cockroach, he is a Madagascar Hissing Cockroach. Before you recoil in horror, you should know that cockroaches are the easiest pets in the world. They stay in the terrarium, need water and a new carrot or apple slice every few days, and their habitat only has to be cleaned out once a month! Cleaning the habitat consists of throwing out the old "sand" in the terrarium, and putting in new... easy as pie!
Andrew adores bugs, but he is particularly attracted to arachnids. His main desire in life is to own a scorpion. Elliott has his doubts, but I have actually considered getting him one... when he is a wee bit older. Scorpions require live food, like crickets, and I want Andrew to be able to handle that all on his own.
Andrew is a very easy going kid. He is well liked by all his peers, in spite of the fact that he believes himself to be Godzilla! He constantly has bugs on the brain, and has written several stories about them. Sometimes I will be in the middle of telling him something, I think he is paying attention, and all of a sudden he will make some random comment about bugs. Let's just say he has read every bug encyclopedia our library has available, and the list isn't short!
Of course, when he becomes a true, certified entemologist, I expect a bug to be named after me!
Brought to you by Ginger at 12/20/2005 10:15:00 AM