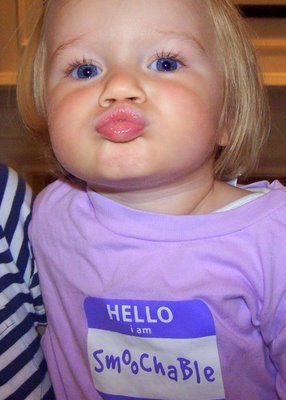 Meet Emma--- my adorable two-year old. Emma is an absolute doll. I know this, because the first two years of her life I couldn't go anywhere or do anything without at least 2 people coming up to me and telling me what a doll she was, or how I needed to get her into commercials. Round cheeks, blue eyes with long lashes, and those lucious pink lips... definitely a doll!
Of course, these days she still gets lots of looks when we go out, but usually they come from a twenty-something with no kids who doesn't understand why I can't control mine!
Today I had to go to the grocery store... couldn't put it off because we were out of the staples... milk, OJ and bread. Emma managed to stay belted in the cart until we got to the dairy aisle (did I mention that is the first aisle we go to?) As usual, she wriggled out of the belt and stood up precariously in the front of the cart. Not wanting her to fall out and crack her head open (lest I get more looks for being an awful parent... plus who wants to spend time at the ER?) I put her into the back of the cart. She promptly started climbing out of there too, so I gave in and took her out of her cart altogether. This new freedom kept her occupied for exactly 30 seconds, then she was off to pull all the Yoplait yogurt off the shelf and throw it in our cart!
Half an hour later, I had finally managed to get most of our groceries, and needed to find new socks for the boys. To get to the boy department, one has to pass through the baby department. Emma was in heaven, and I thought I would be a nice mom and let her look at the toys for a minute or two. That was a big mistake (Hmm... actually, the big mistake was taking Emma shopping!). Since she wouldn't leave of her own accord, I picked her up and carried her over to the socks. She started kicking and screaming as if I was torturing her, which was quite disturbing to the young children who were nearby. I finally found the socks in the correct size, and attempted to push the cart to the register while still carrying Emma, who was still having her tantrum. All the wriggling she was doing allowed her to get out of my arms, so I grabbed her by the hand and started dragging her to the register.
Once in line, I distracted her from screaming by pointing out the kitty on the front of a magazine. That was right next to the candy display, which Emma decided she had to have, and then it was back to... you guessed it... kicking and screaming!
The good news is, the store has a couple of pink ponies that are available for children to ride for a penny. One happened to be right in front of our register, so Emma ran over to it and tried to climb up until I was done paying for our groceries.
She got her ride and we went out to the car where I attempted to put her in her seat. Yes, you can guess what happened, can't you? Of course, I tried to let her get in the seat herself, but she preferred the driver's seat. She is such a little grown up!
After another round of kicking and screaming all the way home, she was tired out. She is now napping quietly and life is sweet. I am sure when she finishes her nap she will do something competely adorable, like say please and thank you without being prompted, or bring me a big pile of books she wants read to her and throw them in my lap with an impish grin. Maybe she will make me an egg to eat in her little magic kitchen. She is so hard to resist.
A couple we know waited several years to have children, but after their first was born the husband wondered why they had waited so long. Having children is a joy, even through the small trials. Besides, how can anyone stay upset when "smoochable" is around?