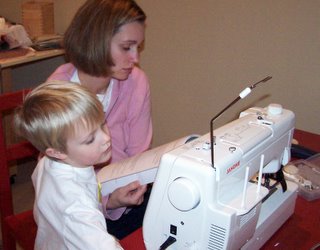 In October, after a year and a half of research, I let DH know that all I wanted for Christmas was a Janome 6600 sewing machine, and dropped major hint after hint. You can imagine my disappointment when he told me, a few weeks ago, that he had called several dealers and the 6600 was just too expensive for us right now. Hope springs eternal though, and I wondered in the back of my mind if he was just trying to put me off his trail. The next day I called my mom and told her the disappointing news. A few days after that I was chatting with my mom on the phone, and mentioned the Janome, and how I was still hoping to get it. She said she had talked to my DH and offered to help pay for it as part of my birthday and Christmas gifts. But he had declined, saying it was just too expensive.Well, my birthday was a couple of days ago. DH made a birthday cake, and then mysteriously told the kids he had some instructions for them before I opened my present. My son had wrapped up a small present with my husband earlier, and then came and shook it in front of me. It sounded like marbles, and when I opened it that evening, sure enough it was marbles... along with a note that said, "The marbles are just to confuse you. Find your real present in the basement." Then my little two year old said, "your hot!" The kids proceeded to play the "hot, cold" game with me, until I got to my sewing room in the basement. At this point, you can imagine I was giddy with excitement! I ran into my sewing room.... only to see my old Brother sitting on the sewing table. I was thoroughly confused! I looked around and could not see any present, but then one of my boys shut the door, and there, sitting behind the door, was a big wrapped box. I tore it open and inside was my new 6600! I was ecstatic to say the least, only dampened by the fact that I had to leave 15 minutes after opening the box to go do some stocking stuffing for a church group. Yesterday I didn't have time to sew either, but today I am hoping to get the machine threaded. Dh told me the woman at the dealership said they didn't like the sell the machine this way, with out having me sit down at the shop, and to make sure I came in for some training. I won't be able to do that until Thursday, when DH is going to come home a wee bit early so I can go sans kids (I am a SAHM with a 6yr old, 4 yr old, and 2 yr old... don't think I want to take them with me!) Anyway, I am happy to finally be joining the ranks of Janome owner after a year and half of drooling! I love piecing quilt tops, but it really was a chore on my old machine. I am definitely looking forward to using the accu-feed foot when piecing those masses of seams that one gets with many blocks. I also look forward to being able to machine quilt smaller quilts. Wish me luck!
Brought to you by Ginger at 12/18/2005 10:02:00 AM

Congratulations, Ginger! And Happy Birthday, I hope you got my card in time. Have fun with your new machine--you deserve it!

Ginger, saw your note on the Janome 6600 list. I also want the new machine but will wait a little while before getting it. I'll watch your blog and see how you like it. BTW, your children are so cute!!

Have fun with that machine!

Wow! And yes, your kids are cute, although the word is wholly inadequate in its description. Happy Birthday from the UK. See you soon.

How exciting. I am so happy for you. See you soon. Love and Hugs
Grammy

Congrats Ging! That was so creative of Elliott!