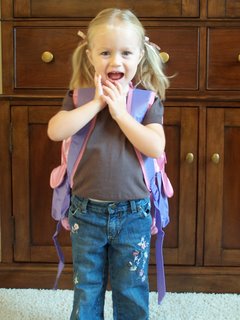 Today was Emma's first day of school. She was very excited, as you can see. While I was waiting for the time to take her to school, she went outside, and I thought she was just pulling flowers out of my planters on the front porch, which is one of her favorite pastimes. But two minutes later, when I went out there, she was standing on our driveway waiting for the bus to come get her. I had to break the news that Mommy's car is the bus for her school.

When I dropped her off this morning, she was a tiny bit nervous, and wanted to make sure I was going to go to school with her. I told her I would meet her teacher with her, and then I would need to go (I had to wait for a repairman that never showed up!)

We met her teacher, and while hanging up her backpack and putting away her lunch bag she noticed that several other princess backpacks were hanging up. I think she will be in good company with this group.

Elliott and I took advantage of temporarily having no young ones at home to go out to lunch. Afterwards, we picked Emma up and her class had just been watching the local high school's homecoming parade, which went right past the school.

Where is baby Emma? And who is this cute but older child standing in your kitchen? The leisurely lunches out won't last long, so enjoy them now :)

so cute! her pigtails are adorable. how often does she go to school?

She's adorable. I can't believe how quickly they are growing up. Maxwell started Joy School last week, but his was a little less exciting since I was the teacher. This week he'll get to go to someone else's home. :) I will have two days this week with only Jonah! I'm not sure what we'll do with ourselves. :)