Wow... finally a minute to type a few thoughts from the week!

Sophie had her first ear infection last week. She had been quite fussy since Sunday night, and it just wasn't like her. She was waking up more, and eating less. On Wednesday, after consulting with my wise mother, I took her in to see my pediatrician (who is the BEST, by the way!) Sure enough, she had an ear infection. Emma told the pediatrician that she was sick also, so he went ahead and checked her ears (just for kicks) and what do you know, she had an ear infection too. He gave me prescriptions for both girls, but said I only needed to fill Emma's if she had pain or a fever (which she never had.)

This week, we were back at the doctor's office for our 2 month and 3 year check ups (Sophie and Emma). Emma is doing great. My pediatrician told me his checklist for her speech says "Speaks in 3 and 4 word sentences". He said he would be scratching that out and putting "30-40 word sentences". She talked his ear off about Ballet, Barbie, and Disney Princesses on Ice. After the visit, he told Emma she had brightened his day, which had started out not so happy with his two teenage sons!

Sophie is doing great as well. Her official weigh in was exactly 12 pounds... which means she is just big enough to fit into 3-6 month clothes! I have yet to sort through them, as I have been swamped with Primary and Christmas obligations, but on Tuesday I plan to see what we have that will keep her warm. She is very smily, and now that her ear is cleared up (the doc was very happy with her ear at the check-up) she is the sweet mellow baby we all know and love. She is even waking only once in the middle of the night. Now if I can just get to bed on-time!

So that was Wednesday, and on Thursday, a day Ethan has off from school, he began complaining about his ear. By the time we made it into the doctor, at 3pm, he had been crying for most of the day. The tylenol I gave him was definitely not working. Sure enough, he also had an ear infection, and after getting his $90 dollar medication, I came to the conclusion that we need a new prescription plan!

In other news, I have been feverishly cleaning out closets and trying to organize my life! I went through all the toys we have and weeded out more than half to throw away and for those worth saving, give to a local shelter. It feels so good to have lots of room in the toy closets! (Just in time for Christmas, hah!) Now if only I can do the same on Elliott's and my closet. 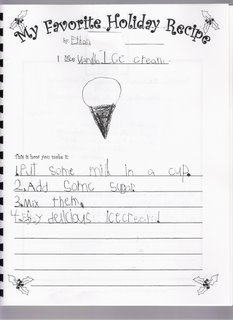 This is Ethan's recipe for homemade ice cream. The kindergarteners brought home a paper that the parents were supposed to write a favorite holiday recipe on to share with the class. Somehow, I didn't get it done, which I didn't suppose was too big of a deal, until Ethan brought home a bound recipe book from his class (supposed to be the parents' Christmas gift!)

Imagine my suprise when I opened the book and saw all the recipes. I felt like the biggest heel. Luckily, I wasn't the only parent who didn't send in a recipe (about half didn't). The teacher had the parents write the recipe on one side, and the children write the recipe on the other side. For instance, here is one girl's recipe for chocolate chip cookies (with her spelling): 1. mix flour and chocolate chip 2. sugr 3. uvn 4. et Isn't that cute?

I have lots to do for Primary during the coming week, getting ready for the new year, and a baptism fireside the first Sunday in January. I am sure I won't have time to write again until after Christmas, so I would like to wish you all a Merry Christmas. I am so grateful to Jesus Christ for agreeing to come to the Earth and atone for our sins. I definitely need the atonement, as I fall short of my potential every day. I am grateful to Heavenly Father for my 4 beautiful children, and my amazing husband. My life is so happy and fulfilled knowing that we are not together just "until death do us part", but for time and all eternity. The blessings of the priesthood and the temple are all I could possibly need at this holiday time.

"et". I love it! Glad Sophie is feeling better, hope Ethan is doing okay soon too!

glad to hear from you again, ginger. i can't believe sophie was already so sick, poor little sweetie. and 12 pounds? miles weighs 13 1/2. he's a little guy. :)

give your fam hugs for us. i'm still waiting for your christmas card. we have a lame-o mailman. love you!