On Christmas Eve, we went to the Indianapolis Children's Museum with our friends, the F*'s. Elliott was able to go with us, which worked out well because my friend Christine and I took the younger kids to the preschool area, while Elliott was able to take the older 4 boys to the Science area. 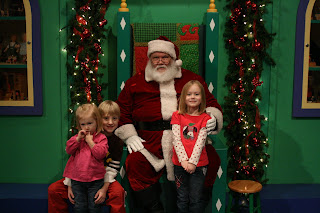 Santa took a break from delivering presents to the boys and girls on the other side of the world, and we were able to tell him what we wanted. Sophie doesn't look too excited here, but she has been talking about it ever since, so it must have made a big impression!

One of the highlights of the Children's Museum from Thanksgiving to the New Year is the big Yule Slide they install on the main staircase. Our kids decided to race their friends down the slide... 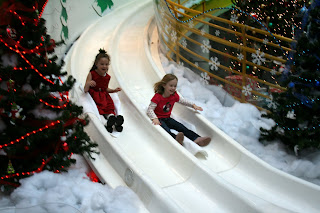 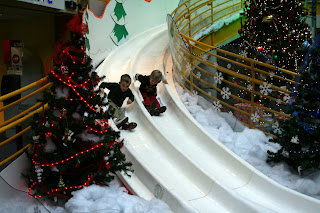 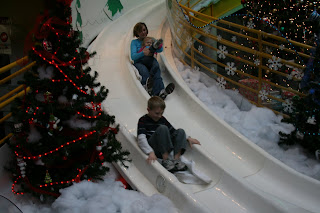 Andrew got to race Sophie and I. Sophie saw the other little boy her age, Wesley, go down against his brother Jacob, and she thought she would get to go by herself. Alas, she was a wee bit too short, so she had to go down on my lap, and she fought me the whole way. Then afterwards, she threw herself down on the floor in a mini temper tantrum. It was hilarious! 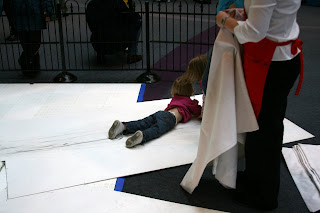 (I know I'm not supposed to laugh, but seriously, my 4th child is the first one to throw
these on the floor tantrums, and I think they are so funny!!!) 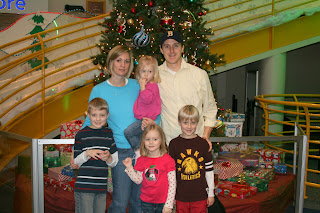 Don't they look excited? Our kids were having trouble getting through the day, in anticipation of the next day. Ethan was begging me (for a week, really) to open presents on Christmas Eve instead, but I held firm!


Later in the evening we went to our good friends the W*'s house. Elliott didn't want a fancy dinner on Christmas, but he was out-ruled, so on Christmas Eve, Jahnelle and Dale made us the pancake dinner Elliott had been craving. We had so much good food... buttermilk pancakes, scones, bacon, clementines, juices, and really yummy hot cocoa. 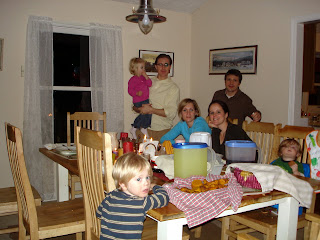 After dinner, the children got to reenact the Nativity. Sophie really liked the chair that was being used as the manger, and she didn't want ot let go of "Jesus", so we decided she could be a living manger. :-) 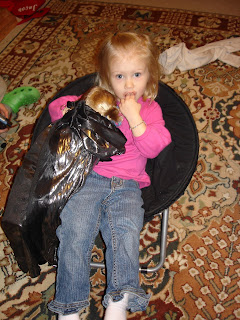 Here are the kids in action. Ethan went for kind of a Jimi Hendrix-esq Joseph look. 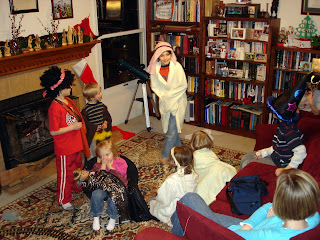 Andrew was a wise-man, and Emma was a sheep. 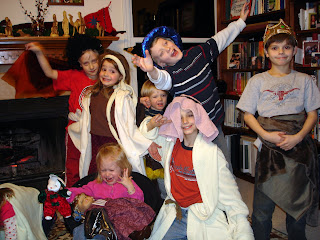 The kids all got to open one present on Christmas Eve... pajamas! The girls kept jeans on under their nightgowns for the ride home as it was uber cold outside! 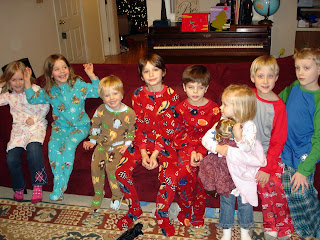 Christmas morning dawned way too early. Well, actually, the dawn didn't come too early, just the kids! On the way home from the W*'s house, we talked about a time the kids could come wake us up... Everyone agreed on 6:30am, so I was, well, tired! when Andrew came in to wake us up at 5:30, and every 15 minutes thereafter. Finally at 6:15 I told the 3 oldest kids to go watch TV, and they did so for exactly 15 minutes. At 6:30, we finally got up, woke up Sophie, and went downstairs to see what Santa had brought us. 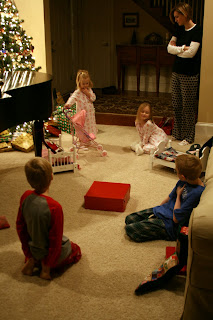 Doll beds, it looks like! And a stroller for Sophie's doll. Not pictured are the gifts Santa brought the boys: mounted tropical insects for Andrew, and for Ethan, a sketchbook and dinosaur cookie cutters.

Christmas Day marked the second day of the past week that Sophie hadn't been throwing up. I'm pretty sure that is why she looked like this most of the time... 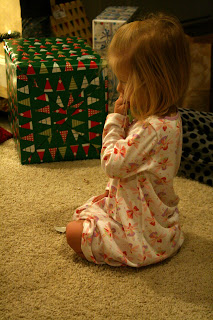 (combined with exhaustion at being woken up too early!!)

This is the after picture. 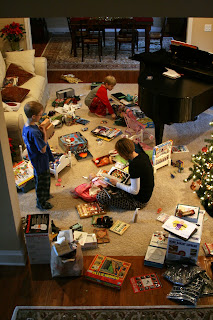 Yes, we had way too much stuff. Every year I think I will buy less, and then we end up with lots anyway. But the kids seemed happy with what they got.
Elliott got a breadmaker, and so we have been having fresh bread every day since Christmas. This was the year of cooking for us, because Elliott got me Ina Garten's new cookbook (which has some amazing recipes in it), a food processor, and a mandolin. I got him a bread machine cookbook, a vegetarian cookbook, and of course, socks.

No Christmas is complete without socks, right?

Afterwards, the missionaries from our ward came to our house and called their families. That was really fun. We just got elders after having sisters for several years, and we are so thrilled. These guys have great testimonies of Jesus Christ as our Savior, and we are so grateful for the good examples they will be for our boys.

In the afternoon, the W*'s came to our house for a Christmas Feast of ham, funeral potatoes, jello salad, green bean casserole, green salad, homemade bread and rolls, and pies. Super traditional food, and it was so good. We had a very happy Christmas, and hope you did too!

(click on that link for green bean casserole for the recipe... I made everything from scratch, only changing the method of cooking the onions-I fried them in butter- and the beans were delicious!!)
Brought to you by Ginger at 12/30/2008 08:22:00 AM

Wow, your Christmas post totally showed up my Christmas post!! lol. That slide is AWESOME! I would love to go down that! Indiana is so cool... Sweet little Sophie. I just want to eat her.

Great Christmas! We had an exciting Christmas too as Kaius was born on Christmas Eve. After Santa came to our house and filled Annie, Jack, Max, Emeri and Broxton's socks we went to the hospital to meet our newest 26th great grandson. We missed having all of our family to celebrate with on Christmas Eve but are grateful that they all had wonderful Christmas' where they live.
Love you all
Grammy

Looks like a fab time was had by all (I was especially jealous of that slide). Happy New Year!

oh that sounds super super yummy - both dinners. mmmm... i bet it was fab! merry christmas!

And I hear ya on the Elders--NOBODY likes Sister missionaries!

Terrific photographs ~ thanks G&E!
I wish we'd had a slide like that when you children were little.

What a CUTE family! It looks like you had a wonderful Christmas. And I chuckled at your Christmas menu -- I've never heard the term "funeral potatoes". What are they???

looks like a wonderful christmas. we missed you guys on new years - i kept thinking about how we spent the day w/ you last year.