He takes after his father 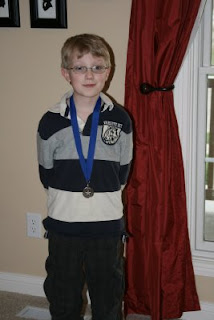 On Saturday, Andrew competed in the Regional Math Pentathlon tournament. There were about 300 children competing from all around the state, and even a few schools from Ohio that participated. MP consists of 5 different math games that the children learn throughout the school year, and then play against another child (of their grade level) at the competition.

Andrew's first round was a devastating loss. I'm not quite sure why, but Andrew had been taught different rules than what was played with at the tournament, so he had a strategy that didn't quite work out. It was really hard on him, but after a little pep talk, a little peanut butter and chocolate for fuel, and lots of prayers by his mother, he went on to win the other 4 games he played!

The scoring system is such that if you win all 5 games you get a gold medal; if you tie one game and win the other 4, you get a silver medal; and if you lose one game and win 4, you get a bronze medal. According to the gentleman who was running the competition, there aren't very medals given out. He was very congratulatory of Andrew.

We skipped out as soon as the games were over, as Elliott was out of town and I didn't want to leave the other 3 kiddos at my friends' house any longer than was necessary (Thanks Kewishes!). One of Andrew's friends was going to pick up his medal for him during the ceremony and bring it to school on Monday. So we were surprised when his friend brought him a silver medal yesterday! Apparently there hadn't been anyone who tied a game and won the rest, so the kids that were supposed to receive the bronze medals got silver instead!

hasn't it been proven that intelligence comes through the mom? way to go andrew! (and ginger)

Congratulations Andrew! It takes a lot of courage to get back in there and compete after a loss!

how awesome that he ended up with a silver! i wonder if they moved some kids up to bronze. good job andrew!

Yay!!! Congratulations Andrew. We miss you guys so much and can't wait to see you all. We look forward to seeing Elliott in the morning.

Wow! that's quite an accomplishment. I'm so impressed with Andrew.

way to go andrew!
and how nice that you got to spend the day with him.