That title got your attention, didn't it?!?  Trust me though, if we were dealing with a real tragedy here, I wouldn't introduce it that way.
Anyway.
If you are an avid reader of Elliott's blog (which you should be!), you would have seen this post a few days ago.  You'll notice at the end of the post that Elliott put the rabbits back in the grass so momma bunny could come rescue them.  Unfortunately, the little bunnies and their momma didn't get that message.  And then, our dear children, along with half the neighborhood, decided to hold the bunnies hostage in a glass cage that formerly was empty and residing in our garage.
Elliott and I didn't realize what they had done because the cage was hidden behind the garage which you have to go past the deck to see, and we haven't done that for a couple of days.
Also, I think it is important to note here that at least one of the bunnies has mites in it's ears.  So we have been telling our kids (and the gazillion neighbor kids who can't leave the poor bunnies alone) to stay away from the rabbits.  And yet every day I see the rabbits being held.
So this morning, we send the boys out to the bus stop, and next thing I know Ethan is beating on the back sliding glass door that leads to the kitchen.  I open the door and he says (almost about to cry), "There's a big hole in the cage!"
That's when I realized the reason the bunnies weren't leaving is that the kids had put them in the old abandoned cage.  I was so irritated that I told him to get to the bus stop and leave the rabbits alone.
It occurred to me a few moments later that something must have gotten into the cage, although I expected to see a hole in the screen at the top.
When I went out to investigate, this is what I saw: 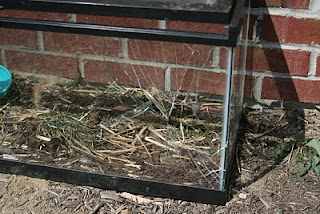 The glass is going inwards, which means something busted the glass from the outside.  It's a complete mystery to us.  Anyhow, one rabbit was missing, and the other was extremely scared and cowering in the corner when I took the lid off.  I let the other rabbit go and am hoping it eventually will make it's way outside our fence boundary, although I just as I am typing this a neighbor girl walked into the kitchen holding it... I can't wait for the lawsuit when one of these rabbits bites a neighbor child!

This was Emma's reaction when she found out what had happened: 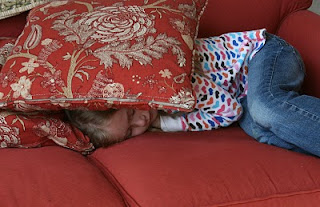 I think I may have to take some action and put the rabbit in the yard of the under construction house behind us.  Let them deal with it!

Anyway, speaking of rabbits, I haven't posted a picture of my not-really-expanding-at-the-moment belly.  This is me at my current gestation of 24.5 weeks. (Excuse the dorky look, but Elliott told me I had to smile.) I think I'm expanding upwards at the moment, rather than out.  Whatever works, right?  :-) 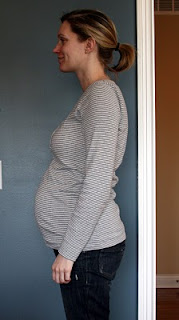 oh no! we have had our share of animal tragedy at the hands of predators, too. it's never a happy day. :(
but you look great, on a happy note! how nice not to be expanding outward!

you won't get bunnies here. just scorpions and lizards. not nearly as loveable.

you look great ginger! i think i only expand outward. sometimes i think it'd be nice to be tall. :)

You Riggs girls (starting with your mom) are all so tiny!!

That is a tragic tale! Hopefully the kids learned something from it. Rabbits and chickens are prey to everything.
You look great! Especially when you smile.

Poor bunnies. I like the pregnancy picture. Joe is always telling me to smile in pictures, then when we look at them I look totally goofy smiling. I'm just not a natural smiler.

Yikes! You have to wonder what broke that glass! You sure look cute with your baby bump!