Look out, big belly coming through! 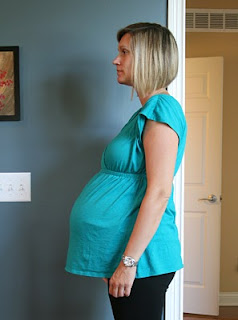 (37 weeks, in all my swayback glory)
I'm officially 37 weeks tomorrow, but what does that really mean?  I've had one induction (2 days before I was due), 2 late babies, and one early.  So theoretically, I could still be pregnant 5 weeks from now.  And frankly, I'm thinking that might be the case.  Although I hope not.  Because that will mean my parents will be on their way home when Henry decides to show himself.  :-{
For some reason though, I do think he is going to be late.  And BIG.  I hope I'm wrong.  But what else can I think when my waist is measuring 44 inches and I still have several weeks to grow?

I had my Group B Strep test today.  My OB asked me if I wanted her to check and see if anything is happening.  I declined.    No need to get my hopes up.  I just read Ethan's birth story a couple of days ago (he loved it!), and had forgotten that I walked around dilated to at least a 4 with him for 2 weeks before going into labor.  And I was at a 4 for at least 5 days before I was induced with Andrew, so I know that whatever work my body is doing at the moment means nothing as far as when I will go into labor.   (I didn't bother getting check with the girls either.)

This morning Sophie was getting dressed, but she was more interested in dancing around in her underwear than putting on her shirt and skirt.  I told her she needed to quite putting on a show in her birthday suit, and she said, "It's not my birthday!"
"I know," I replied.  "It's called your birthday suit when you don't have any clothes on because that is how you look when you are born...  on the day of your birth."
"But Henry has a diaper on in your tummy." she said.
"Nope, he's naked.  We'll put a diaper on him when he comes out."

Hahahaha -- Sophie is so cute. I can't believe how close you are (lookin' great!) I hope you're staying cool in this heat!

Ruby just saw your picture (she should be in bed) and asked if you had a baby in there. She was pretty excited. I remember having the naked baby conversation with one of our kids before Milo was born. They were incredulous.

Sophie and I are both such free spirits.

Baby Henry will be here when the right time comes. Sophie is tooooo cute!