On Tuesday night, at about 9:30pm, Emma threw up all over her bedroom floor. It was awful... let's just say the corn she had at lunch had still not digested all the way!
Elliott was at bishopric meeting when it happened, but luckily he got home about 30 minutes later, because he is the master carpet cleaner. Still, his skills were no match for the mess, so the next day he rented a (stop reading now, Mike) RugDoctor to finish the job.
As long as we had it, we decided we may as well clean a few other rooms too, and one of the lucky ones was the family room. It was kind of fun to see the room with no furniture again. 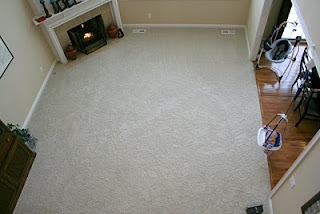 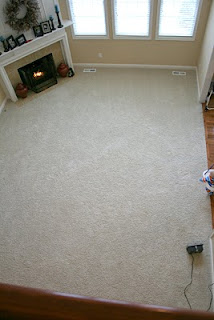 We moved everything back in a day and a half later, but I feel overcrowded. I liked have a large clear space. Lately I have been on a major decluttering/purging/reorganizing kick. It has been a lot of fun, although today I stuck my head in my sewing room and almost started having a panic attack. There is a lot of stuff in there I will probably never use, but it is still hard for me to let go of it. It's one of those "what if" type situations. But I will do it. I am sure I won't even miss any of it when it is gone. Ebay and Goodwill are my new best friends!

Henry is still loving his bouncer, and he now has the hang of the bouncing part. He goes crazy. It is so cute! 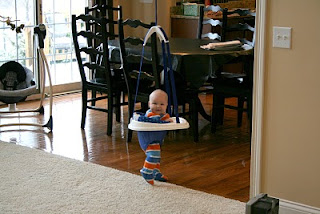 congrats, looks like you got out the barf and about 6% of the rest of the hidden dirt. I thought I taught you better.

This is when living 5 minutes away from us would be especially convenient. We have carpet cleaning equipment parked in our driveway at all times.

I'm with you on the open spaces thing. Lately I've felt like getting rid of everything that's not completely necessary and/or creamy white in color.

We had to rent a rug doctor last summer for some really nasty throw up. It was horrible. I'm glad you were able to get it cleaned up. I had wanted to do another room, but we were lucky to get one done (two or three times).

I really like having no carpets. Sorry Emma was sick. I have been cleaning and geting rid of too.l So much stuff that is not needed.

I love seeing Henry bouncing in the overhead shots. And clean carpets are fabulous.