What to do on a rainy Saturday morning

This morning we had 3 showings, and had to be out of the house from 9:30 until 1:30.  There isn't much open at 9:30 in the morning, so our choices were limited.  We chose to go to a bowling alley a couple of towns away from ours, which gave us a good half hour in the car, so we got there just after it opened at 10am.
First up we decided to take advantage of the glow-in-the-dark mini golf at the place. 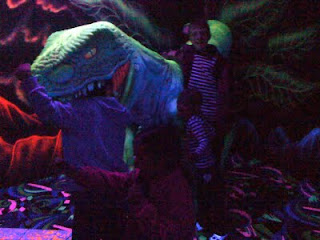 The first time you tapped your ball with the club, the ball would light up florescent orange, pink, or red.  So fun!  A round of mini golf included 8 tokens in the arcade, where Emma promptly schooled her siblings in how to get tickets, which she then used to buy really important things like candy and a little rubber alien.

After the arcade, we still had lots of time left, so we decided to do some bowling.  After the first round, it looked like I would be the big winner, but then Andrew managed to pull out the big win. 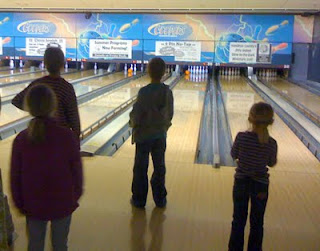 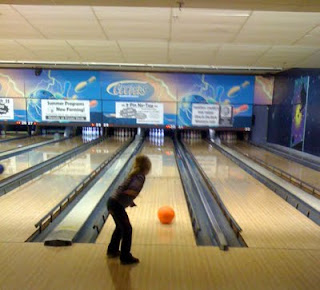 The best part was watching Sophie, who could barely hold the 6 pound ball.  She would drop it at the start of the lane, and it would take a couple of minutes to meander its way down to the pins.
Emma had great form too.  She would scurry up to the line as if she was going to let go of the ball when she got there, but then she would kind of stop before letting the ball go.  It was great.
In the end, Andrew beat Elliott by one point.  Way to go, dude!
Brought to you by Ginger at 4/16/2011 06:38:00 PM

Way to go Andrew. At least you had a good time while you had to be out of the house. Let's hope someone looking today will decide they just have to have the house and fall in love with it!

What a fun day.

Wooo hooo! Way to go Andrew!
There are some good aspects of having to leave your own house.

sounds like a fun morning, and the bowling alley doesn't look too crowded. hope the showings went well!