For some reason all flights from Massachusetts to India take off late at night, and arrive in India very early in the morning. Our Emerites flight was no exception, taking off at 11:15pm on Thursday evening. 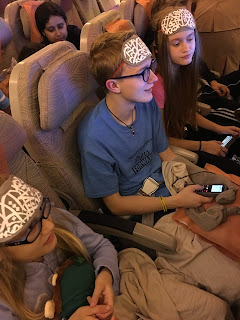 Sophie, Andrew, and Emma checking out the in-flight entertainment options before take off. Sleeping masks compliments of Emirates.

After a 12 hour flight, we had a quick stopover in Dubai and then flew 4 more hours to Chennai. The second flight was almost completely full, and everyone seemed to have at least 5 pieces of luggage, so although our flight landed at 2:30am, we didn't get out of the airport with our bags until 4:30am, and then it took another half hour to get ourselves settled in our hotel. 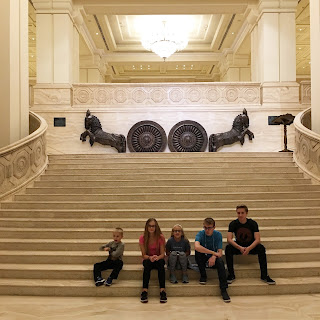 Waiting for Elliott to check us in to the hotel.

At that point we were kind of wired, and I'm not sure the boys ever actually fell asleep. They came by Elliott's and my room at 7:30am to let us know they were going to go hit the breakfast buffet. We managed to doze off for another couple of hours, and then woke Henry and the girls to go get breakfast ourselves. 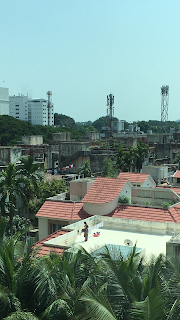 View from our hotel window. Hanging the laundry to dry.

After breakfast the kids wanted to go swimming, and since it was pretty warm already we all jumped in for a couple of hours. Of course, swimming always makes kids hungry, so we were trying to decide what to do about lunch. We ended up ordering room service, but the options were limited and ended up being super good, but also pretty spicy, which meant Elliott and I ate well, but the kids, not so much.

That afternoon, we hired a car to take us to the Madras Crocodile Bank, a really cool zoo with all different types of crocodiles. They are such amazing creatures, but a little bit creepy too. They hold so absolutely still, and with their mouths open they look like they are smiling, but you wonder if they are just waiting for the perfect opportunity to come and eat you! 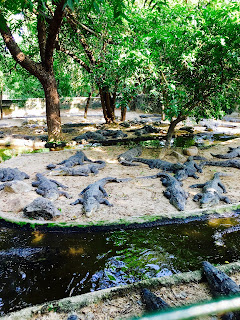 A small sample of the many crocs we saw! 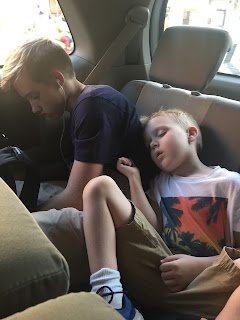 We were all feeling pretty jet-lagged driving around.
Most of us succumbed to sleep for at least a little while!

Our driver then took us on a tour of several landmarks around Chennai, with the first stop being Kapaleeswarart Hindu Temple. There is a big Hindu festival in Chennai called Navratri that started the day we were there. This nine-day festival is dedicated to the Hindu deity Durga. Our trip to the temple was filled with colors, as all the street vendors were selling brightly painted statues of the various Hindu gods and other good luck charms. The many women out shopping in their colorful saris and kurtas made the street come alive. 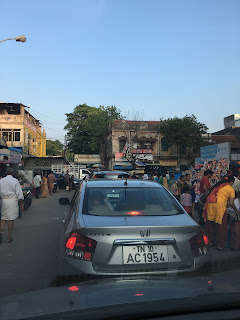 Crazy traffic jam near the temple as so many people were there to celebrate the beginning of the festival. 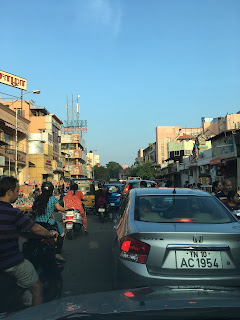 Driving cars is a bit of a hassle in India, so many people drive scooters instead. 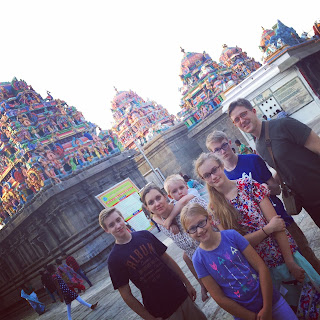 Our Indian guide at the temple had fun taking our picture. 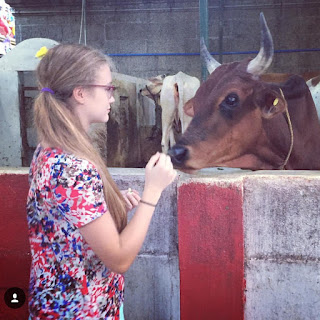 Emma and the Holy Cow. Cows are sacred to the Hindu culture---
now you know where the expression comes from!

By the time we finished at the temple, it was starting to get dark. We drove past the outside of San Thome Catholic Church, which was built in the 1700's. It is a truly beautiful building, but I wondered about the labor that was used to build it. There are actually many catholic churches in southern India, as it is believed that Thomas, apostle of Jesus, visited India in AD 52 and baptized several people, who founded what is today known as the Nasrini Christian sect.


A quick drive past Marina Beach (where Sophie spied several Marwari horses) and then a stop at what I'm sure was the first of many handicraft shops. Emma found a pretty hand-carved elephant for one of her teachers, and we also found a paper-mache bell Christmas ornament, painted with stylized peacock feathers, to remind us of our amazing day in Chennai.