Today we were met by our driver who took us out to a medical clinic run by Rising Star Outreach (RSO). Twice a month, the medical team of nurses from RSO visit 15 different villages with supplies to care for patients with leprosy, diabetes, and any other ailment that they can easily take care of. If further treatment is needed, the nurses work with the staff doctors to figure out what the best course of action will be. Because of the type of visa we obtained for our travel on short notice, we were not able to actually live on the RSO campus or be trained to help with the medical care, but we were able to visit with the patients and children from the village. It was super hot, but so great to get to meet the residents of this village. The people were all so kind and friendly. One thing I have found about the Indian culture is that they go out of their way to be gracious in all things. Nothing is any trouble for them, at least they will never let you know it! More on that with tomorrow's post, but for now, I would love to introduce you to some of the wonderful people we met today. 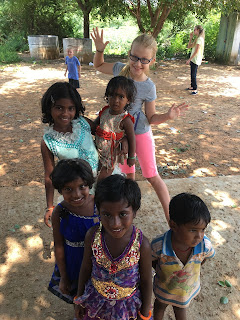 Sophie's fan club!
The one little boy in front didn't have any pants or underthings on,
which Henry was aghast about. I had to explain that in some
countries the children don't wear any bottoms when potty training! 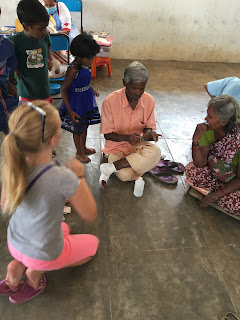 This couple was so happy to get a photo of themselves.
When you first take the polaroid, it comes out of the camera blank.
We gave it to the husband, and his face completely lit up as he watched the image appear. 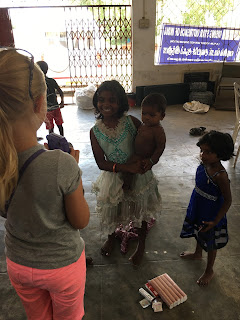 I wish I could have gotten a better picture of this cute little baby.
He was wearing nothing but a string around the middle,
which showed off his cute little butterball belly! 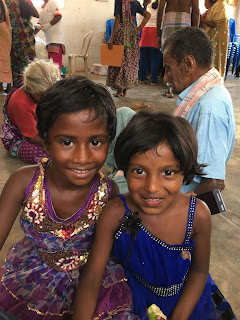 Once these two girls got their hands on my phone, they didn't want to give it up!
They had fun looking at my pictures from the beach this summer,
and playing Talking Tom. 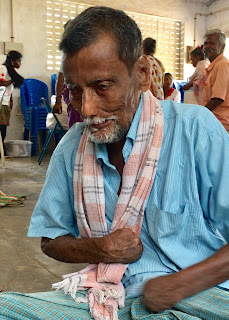 This man is missing all his fingers and toes, and is blind, but never stopped singing the whole time he was at clinic.
He has a beautiful voice. I have no idea what he was singing about, but it was a beautiful song nevertheless. 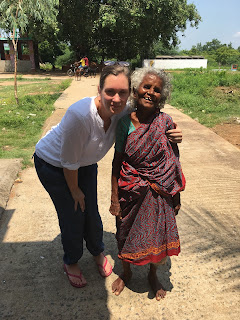 This is Mary. She can't speak in more than guttural sounds, but she had the most infectious smile. She loved seeing Henry,
and took me for a walk to her humble home. She showed me a photo on the wall of her husband who passed away
and was also excited to show me her sewing machine.
She made the shirt she is wearing under her sari.
She and I would probably be great friends if she lived in Boston! :-) 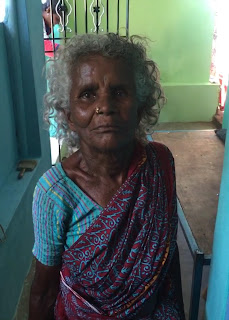 A close up of Mary's shirt.

The medical clinic is near a day care that RSO also checks in on. The kids at this center are all age three and under. They were just finishing lunch when we got there. We put together some cardboard barn and animal sets for the kids, and spent a few minutes playing with them. 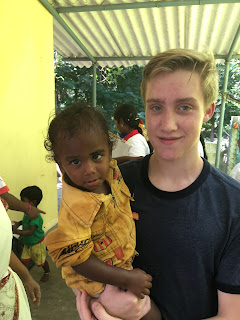 When we first got there, this little guy walked right up to Ethan and held his hands out to be picked up.
Ethan looked at me, a little unsure of what to do, so I said, "just pick him up."
Ethan did so, and the little boy's look of pure joy was unforgettable.
I'm pretty sure this will be one of Ethan's strongest memories from the trip.

After the day care, we went home for lunch and to pick up the maid they had dropped off to clean our apartment. I felt bad about having a maid, as we certainly are capable of cleaning our apartment and doing our laundry, but again, it all comes back to this Indian hospitality. They insisted on having her clean while we were gone in the morning, saying this was her job and she wanted to do it. They consider us to be their guests, and truly succeed in making us feel like anything we need is no problem. I have heard that refrain over, and over, "Yes, Ma'am, it is no problem." 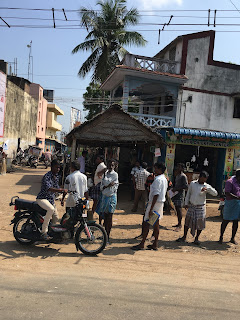 These men were waiting at the bus stop, which happens to be in front of an open air meat market.
I was trying to figure out how the shops work everywhere we went, because there are so, so many,
and they all seem to carry random things. I need to ask someone,
but I think it may be that the shops each are very specialized in their items.
So while in the United States we could walk into a hardware store and buy all types of items for home improvement,
in India each store specializes in one or two particular types of items. One sells trim to go around doorways and windows,
while another sells flooring, etc... If you have any insight into this, please comment below.

When we first arrived at our apartment for RSO on Sunday, they had supplied us with many fresh vegetables, fruits, bottled water, breads, and eggs. However, two things we still needed were salt and butter, so we stopped at the grocery store on the way to the RSO campus. Luckily most people in India speak English, (since I know zero Tamil, the language spoken where we are), so I was easily able to get the butter and salt I needed, and the deodorant that I remembered I needed at the last minute (how could I have forgetten that at home??) 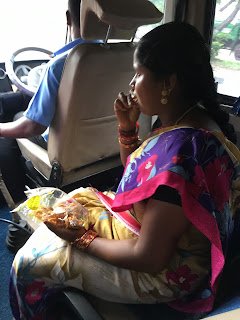 This is the woman who cleaned our apartment for us. She was so nice (but she didn't want to look at me for a picture. :-)
And look at this beautiful silk sari she wore while cleaning!!
When we stopped at the grocery store she went in and got this snack that she shared with us.
It was so good,  I have to try and find more to take home with us.

The drive to the campus from the RSO apartment is an hour and a half (another thing I feel bad about, if we were doing this again I think we would get a hotel room close to the campus, rather than making them drive all that way.) We are still dragging a bit from being off of schedule, so Ethan and I fell asleep on the drive. In fact, I didn't wake up until we got there and Sophie was shaking me! 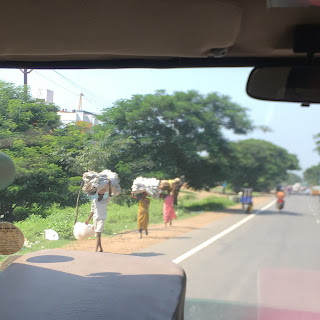 Snapped this before I fell asleep!

We got to campus just in time for the children's play hour. They play outside on a large playground, and we were so happy to join in the fun. All of us except Henry. Most of the students, especially the younger ones, have never seen a little blond boy before. They were all so friendly, and basically swarmed him, which was pretty traumatic for him because he did not like all the attention. The kids kept coming up to me asking his name and if he knew how to speak. It was pretty funny. He finally found his groove when Sophie let him use her Instax polaroid camera to take pics of the kids. When he took the second picture about 20 kids crowded around him, pulled the film out of the camera, and knocked it out of his hands, they were so excited to see it! But then with help from the teachers and me, he was able to use up the rest of the film in a more orderly manner. 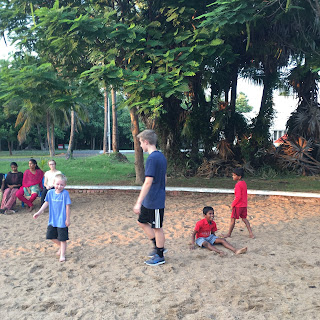 Playing with the boys. 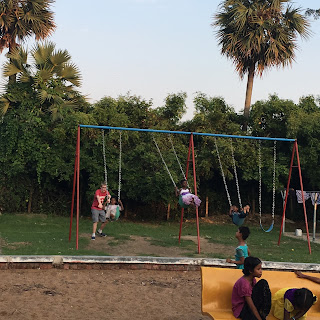 Andrew got the job of swing pusher. He was busy the whole time!

Finally, we shared their prayer time, and then had dinner with the children. Let me tell you, those kids can eat some spicy food! My kids hardly touched it because it was too spicy for them. I liked most of it, but when I was talking to a couple of the teenage girls they told me they didn't. haha.

As I mentioned earlier, the drive to our apartment from campus is 1.5 hours, which meant our driver had a three hour round trip to take us home. I felt really bad about this, but he assured me he loves driving. Again, that graciousness where nothing is any trouble. I really need to emulate this more in my life.

On the way home we were treated to some sights we hadn't seen yet, as we drove through the rural areas at night. A couple of times cows were bedded down for the night taking up a whole lane of the two-lane road. Pretty unusual for us to see, but par for the course for our Indian driver. 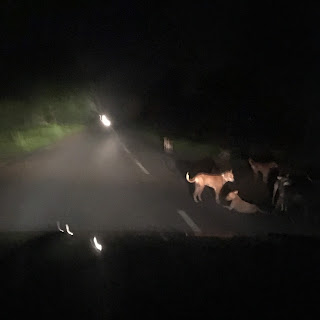 I didn't get a pic of the cows, but these dogs had the same idea.

We arrived home exhausted without working internet, which caused concern for Elliott in Singapore when he couldn't get in touch with us. Finally I just ended up calling him (which I am sure cost an arm and a leg!) and he was able to get in touch with RSO to let them know we had no internet.

This looks wonderful. It's so neat you get to have this experience.