So even though we had some great experiences at the leper colony and at the school on day 3, we also had a rough day, in that we were unprepared for what was going to be happening. One major thing we didn't do was bring water with us. I knew we needed to, but when we were rushing out the door, I just forgot it. We were all pretty dehydrated and starving by the end of the day, and Sophie especially wasn't feeling well. She had almost fainted twice during the day from lack of water and food. I know my kids well enough to know that they would need a break on Tuesday if we were going to be able to continue to work hard the rest of the week. So we took a rest day on Tuesday, relaxing at the apartment, rehydrating, and getting some school work done. Since we spent the day at home, I thought I would show you our "flat" as my new friend Kavitha calls it. 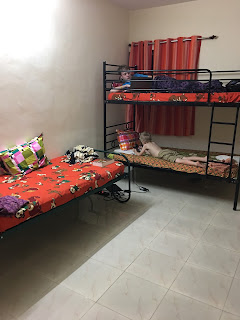 Our living quarters are pretty bare bones, which is just fine.
Two rooms have the three bed configuration seen here,
and one bedroom has just two twin beds.
All the bedrooms have air conditioning units. 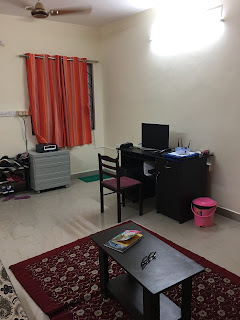 The front room has a very basic settee and two chairs, plus a computer desk.
Luckily we do have wifi this week, or my kids would be hating me!
Every room except the kitchen have a ceiling fan or two.

Our kitchen is fairly basic as well. We have a three burner cooktop that is attached to a gas tank which sits under the sink. There is a small fridge, and no dishwasher and no hot water. Although there is a microwave and toaster, we can't use them because they trip the circuit breaker within 30 seconds of turning them on. Really, we don't need them though. We just boil water on the cooktop, and toast bread in the frying pan. It works perfectly! The biggest problem for us is the water situation, because our North American digestive systems can't process the Indian water bacteria. Up until this afternoon (writing this on Wednesday night) we have been using bottled water for everything except washing the dishes, which turns out to be a ton of water! Luckily, our hosts at Rising Star Outreach installed a heavy duty filter system for us, so we now have clean water we can use (well, hopefully! I took the first drink from it tonight... hopefully all will be well in the morning!) It will make life so much easier and less wasteful. 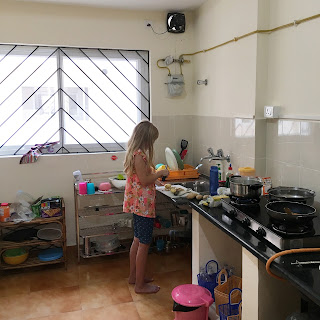 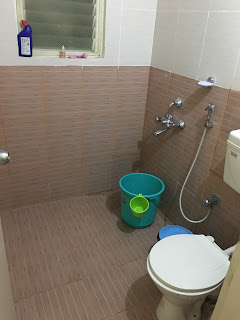 There is no shower stall, the whole bathroom is tiled and yes, everything gets wet! But it all dries really quickly too because it is so hot here.
Funny story, when we first arrived, they showed us how to use the water heaters, which are installed in two of the bathrooms. When they said two bathrooms, for some reason I was thinking there were two showers, not water heaters. Since I knew there was a shower in the outer bathroom, and one in the boys bathroom, I assumed the girls did not have one in their bathroom. When I took my shower yesterday, I dutifully turned on the wall switch for the water heater, and waited 15 minutes for the water to heat up, as instructed. However, even after the initial 15 minutes, and then running the water for a long while to try to get it heated more, it never raised above lukewarm. I thought it was odd, but honestly I didn't need it any warmer as it is so hot here! I even had Henry take a shower with me and the water was fine for him.
Then tonight I had Sophie take a shower in my bathroom too. I think the water was a little bit cooler for her than for me, but she survived. It wasn't until after her shower that I happened to go into the girls bathroom and see that they have a water heater on the wall of their shower, which the boys do too, but my bathroom does not! So we took our showers without the water heater! Well, live and learn. But seriously, it is so hot here that a hot shower would actually be unbearable. 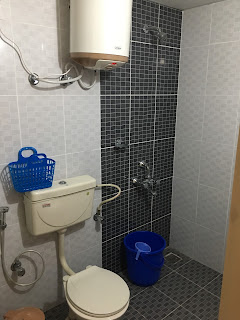 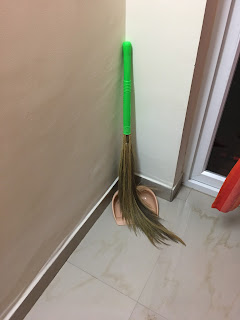 This is our broom. It is made from some type of soft grass.
I never thought I would miss my broom back in the USA!

We are really grateful to have this apartment available for our use. We are kind of the guinea pigs, as we are the first family RSO has hosted in it, but they will be making it available for a small fee to other families that would like to come do service at RSO.

It is so interesting to see/read about your apartment. I'm enjoying all your posts! What an amazing experience you are all having! The graciousness of the Indian people you encounter is so touching!