This morning we started bright and early with Rising Star Outreach (RSO), and made our way to the Puthirankottai leper colony. This colony was much poorer than the previous colony, as evidenced by the homes the residents lived in. Much smaller too, there were only about 15 houses on a one lane road.
The medical team meets under this beautiful large tree for care here, which provides not only shade but a cooler place to receive their care. It was actually cooler under this tree than in the building we went to on Monday, because the lack of walls allowed the breeze to blow through. 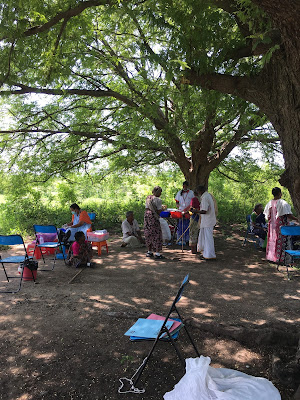 Of course, having clinic under a tree means that when it rains, the team is not able to provide care, but it is pretty rare that it rains. Rainy season in this area is generally late October. 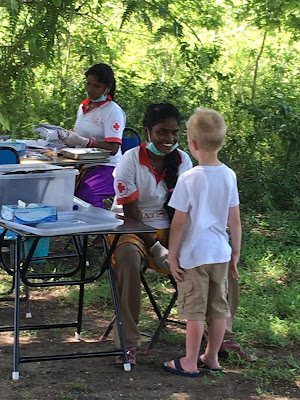 One of the medical team, Priyanka talking to Henry.
Priyanka is a graduate of Rising Star, and her sister is now a student there as well.

The woman in the picture below, Marie Therese wanted to take a picture with me. When I leaned down so we would be about the same height, she motioned that no, she wanted me standing full height! Many of the people in the colonies have had poor nutrition their whole lives and as a result are quite small (I'm 5'8" for reference). 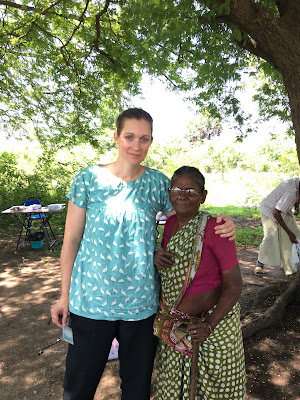 Me and Marie Therese 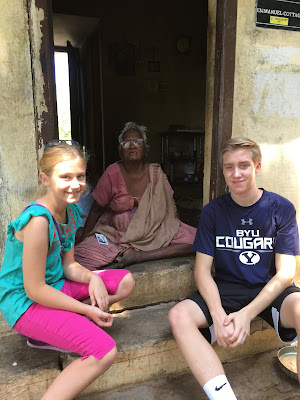 Mary Ruth, the oldest member of the colony at 100 years! 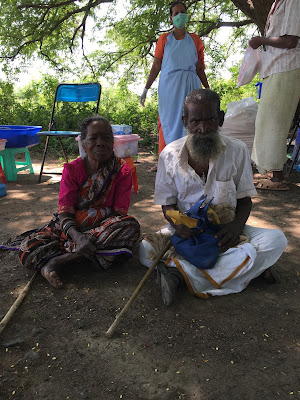 Kavitha, one of our guides from RSO, told me that this couple, Saral and Santosham, are the comedians of the colony. Sure enough, when Sophie told Saral that she wanted to take her picture with her husband, Saral started yelling for her husband to hurry over. It was pretty funny. 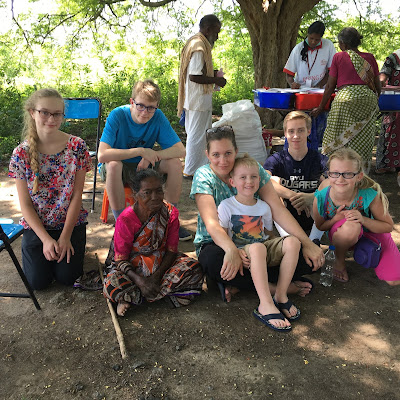 Then Saral asked for a picture with all of us. We gave her a polaroid of each picture as well.

It was so wonderful to spend time with the residents. They were so happy to talk with us, take pictures with us, and show us their homes. 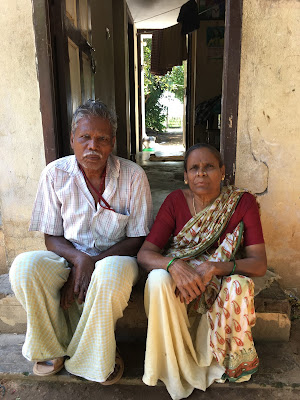 Elumalai, the leader of the colony, and his wife Casima.
He has a cellphone attached to that lanyard around his neck.
All the residents are extremely poor, and receive money from the government,
but many have cell phones and televisions.
(And of course in this day and age, a cell phone is really necessary!) 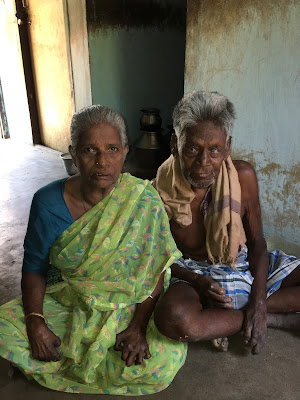 Elizabeth and Theerthakiri asked us to come visit their home.
There was no furniture in the main room, they just sit on the floor. 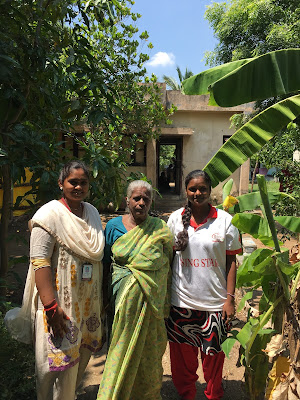 Elizabeth has a beautiful back yard , it is very lush, and looks like Hawaii!
She has a rice paddy in the far back of her yard, along with a curry tree,
a pepper pod tree, and a goa fruit tree.
(We tried the goa fruit. It's an acquired taste, kind of a cross between basil and apple.) 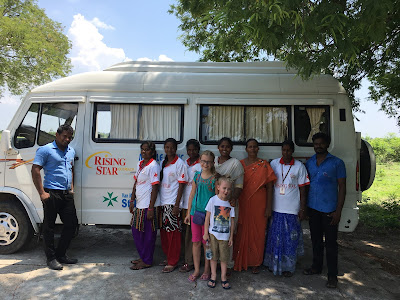 When we finished at the colony, we went back to the school campus. Although the school is run by Rising Star, the actual name of the school is Peery Matriculation School. It includes children ages 6-18, in UKG (their version of kindergarten) through 12th standard (grade). 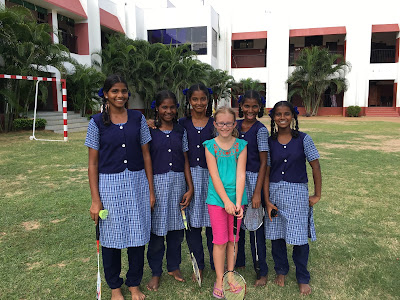 We got to go to some classes with them. Sophie and Emma had fun playing badminton with the girls in 7th standard. It was really hot outside... we were all dripping. I can't believe these girls do this every day! 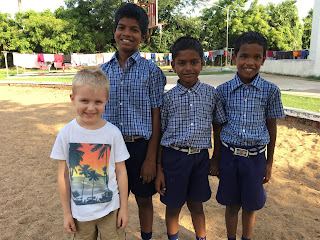 On the way to lunch, we happened to meet Mrs. Leema, who teaches 1st Standard of Tamil, so after lunch Henry went and joined her class. He was hoping to learn some words in Tamil, and was disappointed when it was a grammar class! But later he had fun on the playground with these three boys. 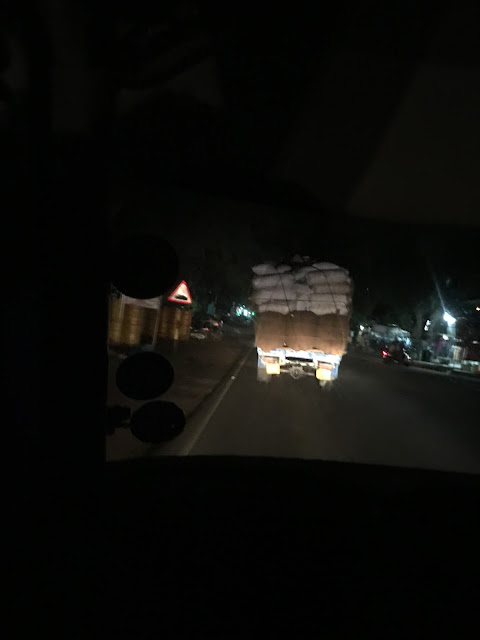 On the drive home I couldn't believe how many people were out an about after dark. It didn't really seem that much cooler to me, and the mosquitos were out in full force. But people were still thronging the streets. We saw quite a few trucks with loads piled super high. 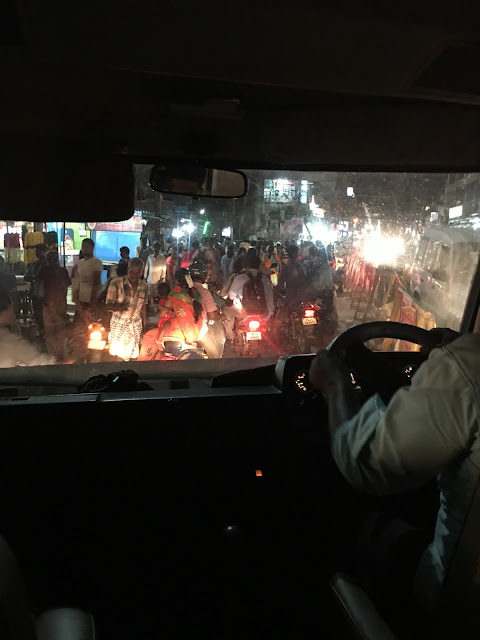 Our driver had a hard time making it through some areas because of the masses of people!

You have to be really skilled to drive safely in India. It really is chaotic. There are rules, but they are not at all like ours in the U.S.  I'm really grateful to the drivers from Rising Star who ferried us safely everywhere we needed to go!

What an adventure! It's a "must read" every day. (And major disappointment when you're too busy to post!)