Friday, Oct. 7, was our last day with Rising Star Outreach.  In the morning, we attended the school-wide assembly where we thought we were just going to give a short speech letting them know about the books that were being donated through the generosity of our many friends. But actually, it ended up being a bigger ceremony. Since the fundraisers were part of Emma's Personal Progress Project, she spoke for our family and handed over a ceremonial stack of books to represent the books being donated. Then we were garlanded with these pretty ribbon garlands made by the teens at the Peery Matriculation School, and given friendship bracelets. It was really a lovely ceremony (and funny for the kids at the school too, when Henry decided to turn around and shake his bum at all the kids.) This was supposed to be a solemn type of assembly, but Henry was pretty much done with the whole thing, and wasn't afraid to show it! My kids definitely keep me humble. :-) 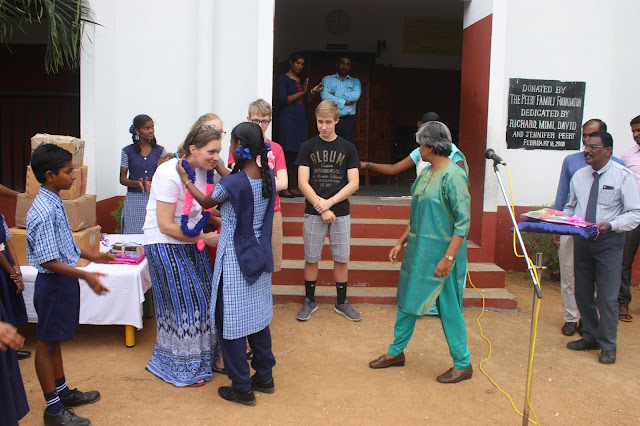 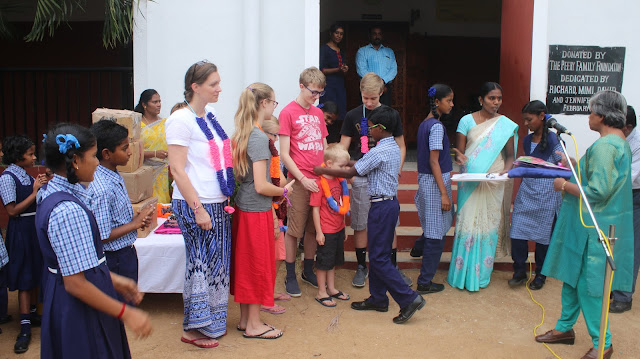 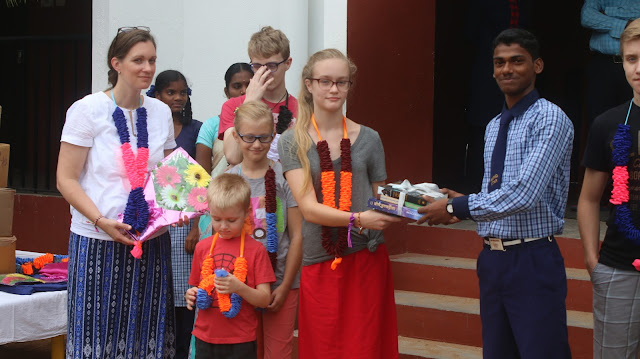 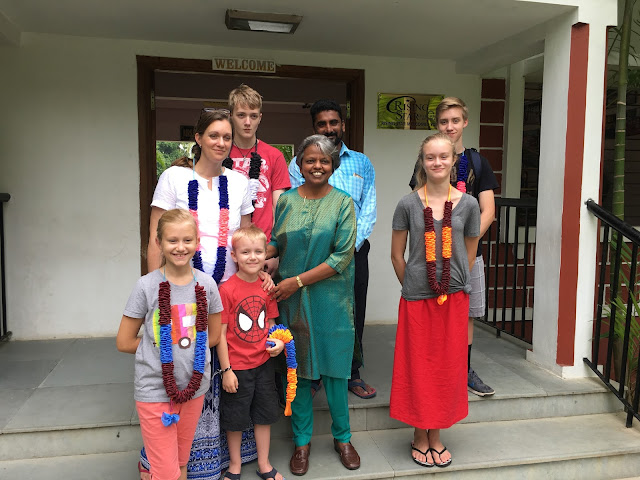 After the assembly we were off to our final leper colony. This was not really a colony though, it is actually more of a home for people with leprosy and no one to take care of them. The man who runs the home, Ilango Yesu, referred to the residents as "orphans", because they don't have any family connections available. 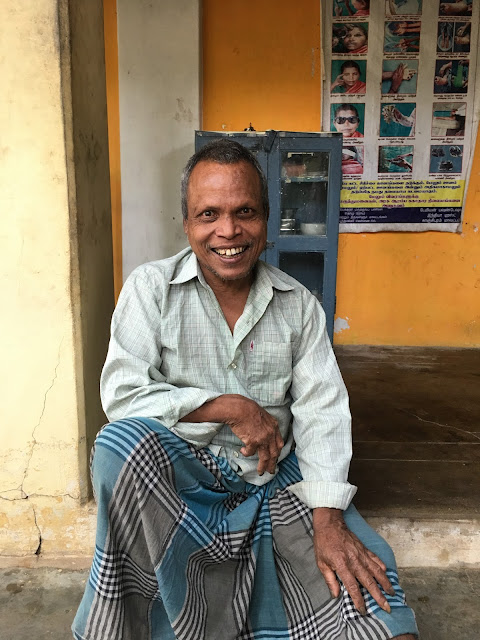 Can't remember this guy's name, but he sure was happy! 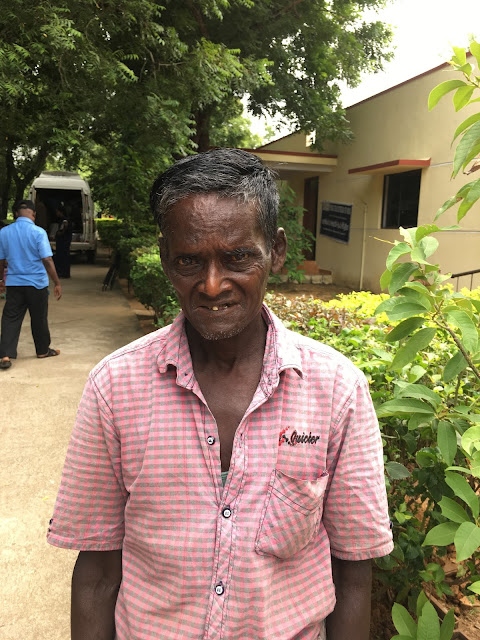 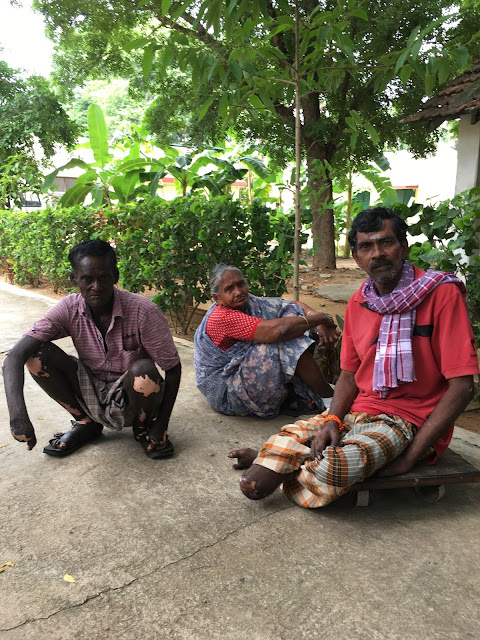 Let me tell you about Desappan, the man on the right in the picture above. One day Ilango (the man who runs the facility) got a call from someone asking if the home had room for another resident. They had found this man, Desappan, on the street. Ilango went to go see Desappan, and when they first met, Desappan had been in the street for an unknown amount of time. He was deathly thin and smelled of rotting flesh. 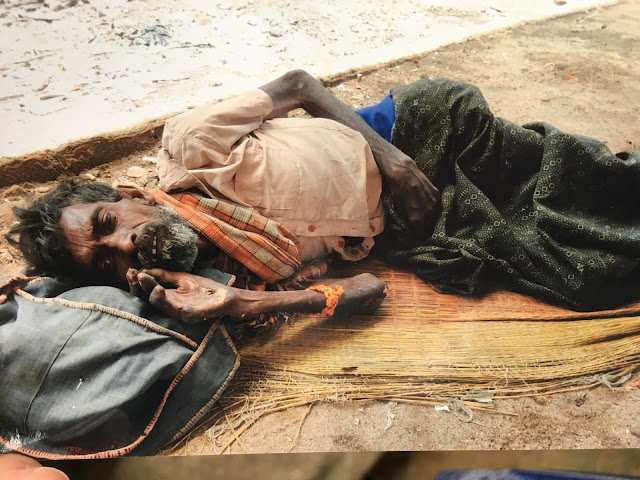 Desappan when he was first brought to the home.

There was also a plastic bag wrapped around Desappan's lower right leg. When Ilango unwrapped the plastic bag, he found that the flesh on Desappan's leg and foot had been completely decimated by leprosy. All that was left was the raw bone. 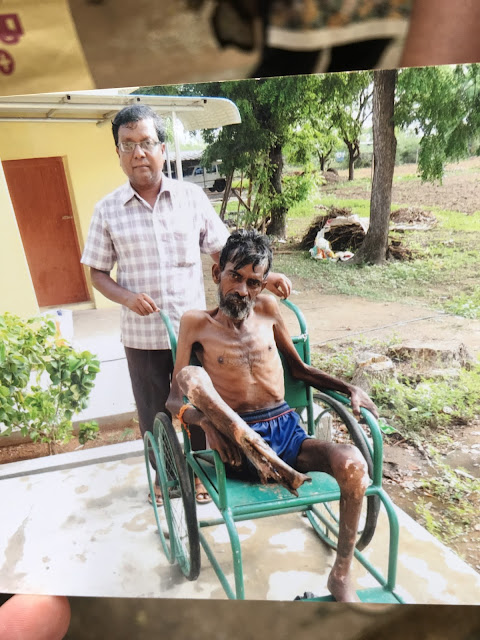 No one who saw Desappan those first few days thought he was going to live. In fact, when Kavitha (one of our guides) was telling me more about him later, she was teary-eyed, remembering what bad condition he was in. But Ilango thought to himself, "There is a reason that God had someone call me to take this man, so I will do my best for him."
With that thought in mind, Ilango set about caring for Desappan. He was given proper medical care, and adequate nutrition, and after 10 days was doing much better. Everyone was so surprised!
It has now been about a year since Desappan came to live at Anandepuram Home. He told me that he loves living there, that it is his home now. 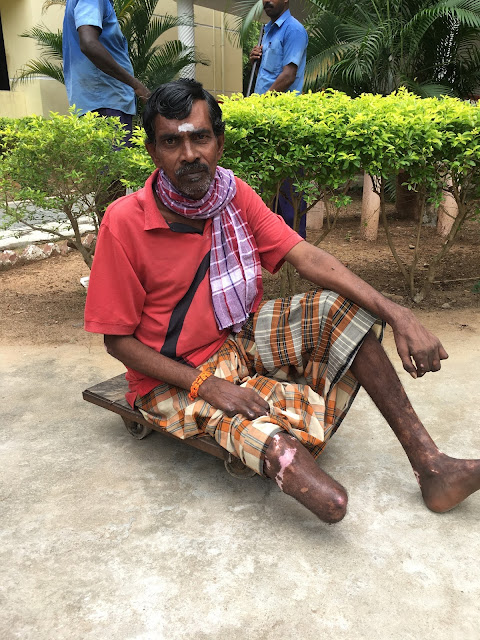 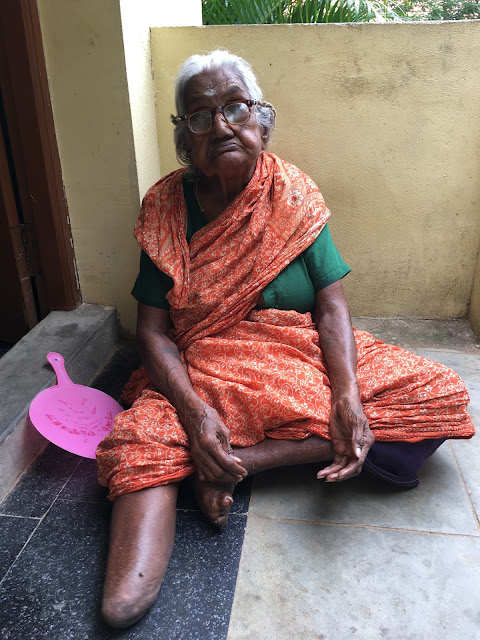 95 year old resident of the home.

The man who makes it all happen, Ilango Yesu, has an interesting story as well. He gave me the full background on the facility. It was originally started by a Belgian woman who spent many years of her life traversing India caring for those with leprosy.
Ilango Yesu has been running the home for thirty years. His wife lives in a different state, and so he doesn't see her very often, although his son recently moved to Chennai, which is about an hour and a half from the home, and so they meet at his son's home once a month now. 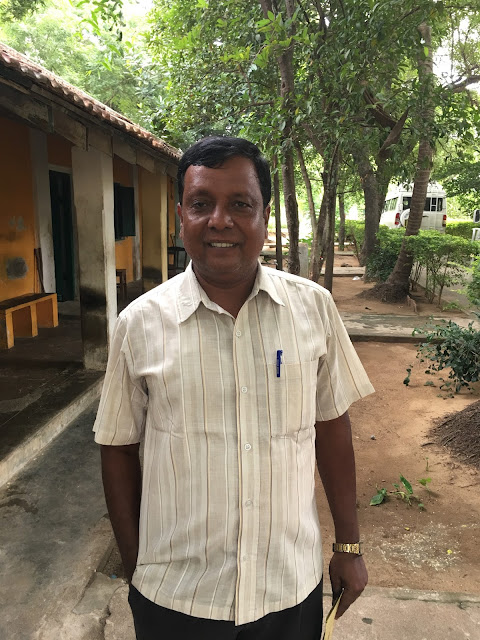 Ilango Yesu - he says that he just works as God's hands.
And he truly has helped some miracles to happen.

After our visit to Anandepuram, we went back to the school for afternoon classes... And our driver stopped off at a shop to let us get some ice cream. We had the nicest men as our drivers that week! 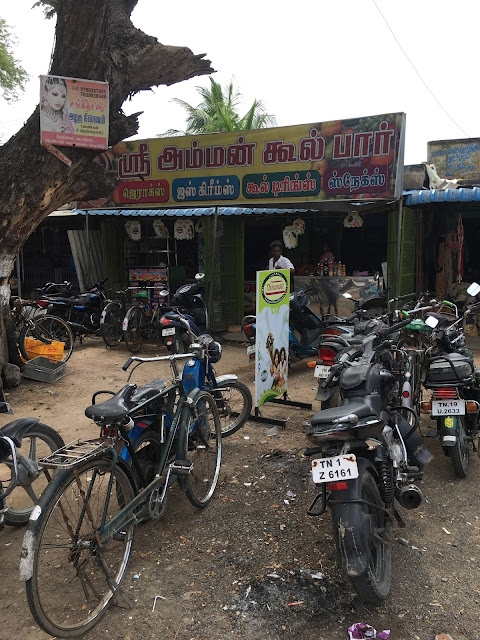 The stall the man is coming out of was the ice cream shop. 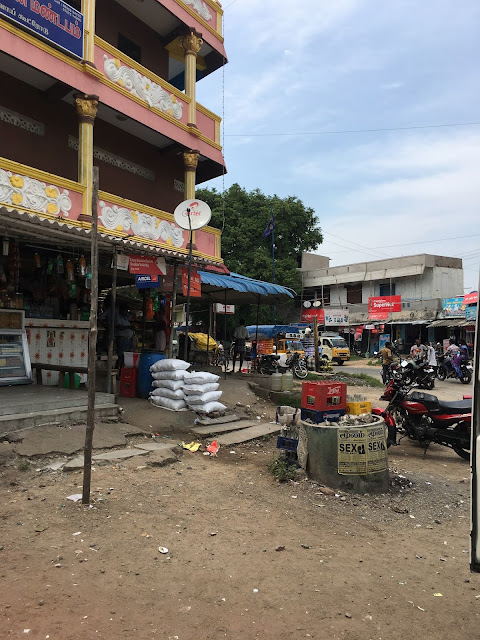 View to the other side of the street. The sex ad is for families with infertility issues.

In the afternoon we hung out in the computer lab again, and then went and played more badminton. After a while, some of the teen boys invited Ethan to go play soccer with them, while the rest of us went to the playground to hang out. As I mentioned earlier, Henry was pretty much done with everything. While at RSO, everyone would ask him his name, and try to talk to him, and try to play with him. Everytime he went to the playground he was mobbed by 20 children asking his name and his standard (grade). He is a little bit of a shy child, and dislikes new situations. By the end of the week he had hit his limit. Playground time ended with  me having to take him to the dining hall to hang out and calm down. After a while we wandered over to where the cooks where making the evening meal. I wish I had gotten a picture of the dining hall and the kitchen. It is all open air, and even though their are fans, it is still extremely hot! The women in the kitchen were rolling out the chapatis for part of dinner, and the head cook was very kind and offered Henry one. He loved it. I think for the week we were in Guduvanchery our kids were kind of starving, as they are used to grazing all day. It is a luxury I hope they will be grateful for when we are back home!

Finally, it was time for evening devotional, and then for dinner. Elliott was supposed to be finally joining us for the evening meal, so we were waiting and waiting, but his driver didn't know how to get there exactly so he ended up getting there after the meal was over.

Our final excitement of the night was getting to participate in the delousing treatment of the kids. I wasn't really sure I heard Dr. Joseph right when he asked if we would like to participate. Delousing? That sounds pretty awful. But it ended up being one of the most fun things we did with the school kids that week. 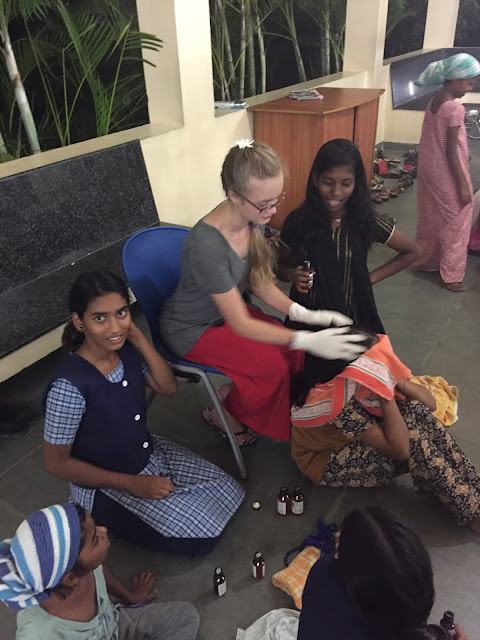 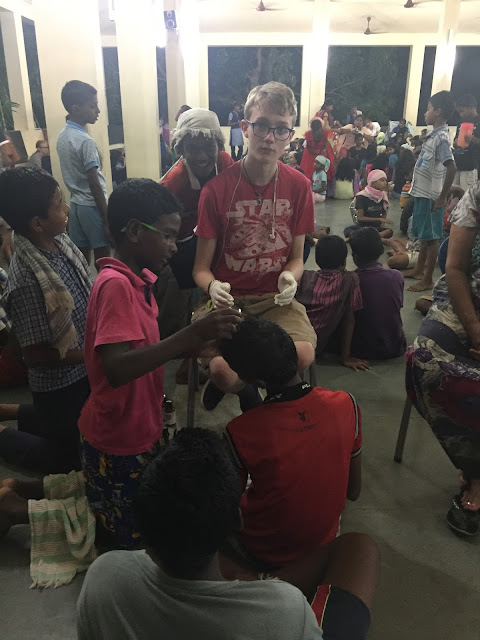 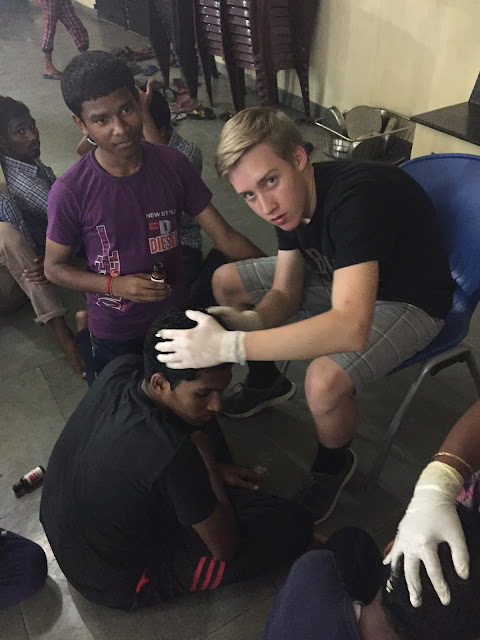 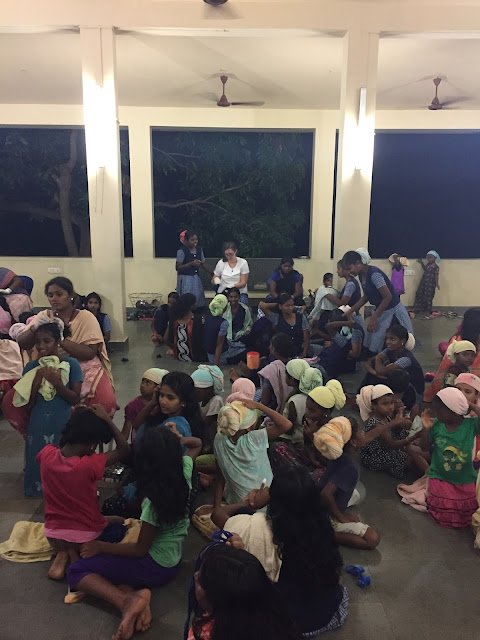 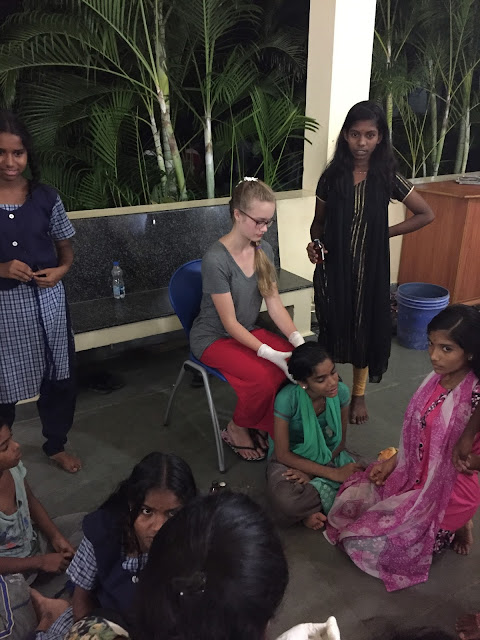 All the kids that live at the school have to get the hair medication that kills lice put  in their hair, whether or not they have lice. They go through this treatment every three months or so. We donned rubber gloves and the kids would come sit at our feet while we would rub the medication in their hair. It sounds weird, but was a great time for the kids to ask us questions about our life. Elliott showed up right as we were getting underway, so all the girls were asking me how long he and I dated before we got married. They were astounded that we dated for ONLY a year before getting engaged!
We had a bittersweet goodbye at the end of the treatment. We were sad to leave our new friends at Rising Star, but it had been an exhausting and hot week, and we were ready to move on to our next adventure. 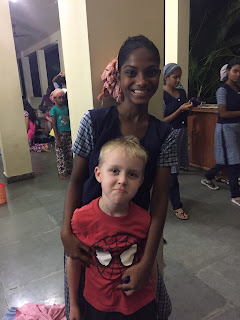 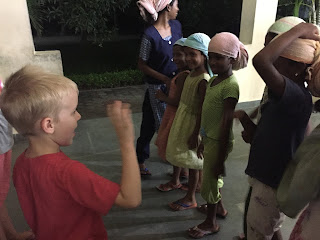 Finally we were driven back to the apartment we were staying at. We all collapsed into bed after a long but fulfilling day!

Thank you so much fr the pictures and writings of your time there. I have shared with several of my LDS friends about your adventure and they were anxious to see pictures.
Hugs