Today we left the luxury of the Grand Cholla and set out for Guduvancheri and Rising Star Outreach.
But first, we enjoyed the amazing buffet breakfast at the hotel. There were so many options of what to eat for breakfast, but not too many familiar to my cold-cereal loving kids.  Sophie was brave and tried a wonton dumpling, which she declared tasted just like sushi (a win!) My favorite items were the vegetable fried rice and strawberry milkshake.
Poor Henry, he woke up feeling not too great, and I assumed it was maybe because he hadn't eaten much the day before. At breakfast though, after eating a few things, he brought them right back up. Luckily we were prepared with an extra bowl handy. I took him back to our room for a warm bath, and then a nap. He slept for an hour or so, and when he woke back up he seemed to be doing somewhat better, based on the fact that he started up with his beloved arm toots again.
Alas, when he had a sip of water it came right back up, and I was pretty worried about him becoming dehydrated. This was right about the time we needed to be leaving for Guduvancheri, where we will be staying while we are working with Rising Star. So Elliott and the kids packed up the suitcases and Henry slept on me for a while longer.
We checked out of the hotel and climbed into our (seatbelt-less) motor coach (Which might have been a nail-biting prospect if traffic ever went very fast, but there are so many cars on the road that it doesn't!) 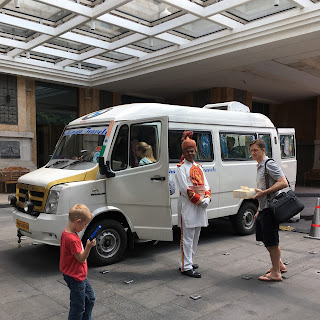 Our sweet ride for the day. And isn't the doorman awesome?!
Plus,.right as we were leaving the hotel brought Elliott a yummy chocolate mousse cake to celebrate his birthday.

I was completely entranced on our drive out of Chennai. There is so much to see, and it is so different from anything I have ever seen before. Even Elliott, who has been to 40 countries, has never seen anything like India. There is no way to explain the cacophony of sights, sounds, smells, beauty, poverty, color, chaos, and energy that is India. 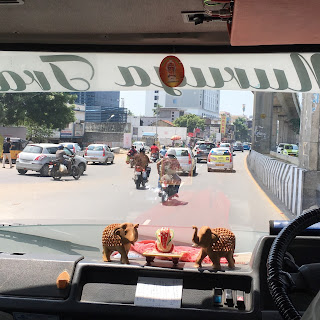 There aren't always lane lines, but even when there are, they often aren't followed.
Somehow though, everyone seems to know how it all works. 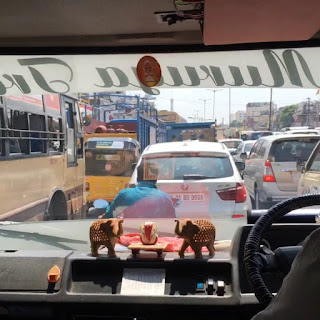 Two things you can count on in Indian traffic: major traffic jams, and lots of honking.
They use honking to tell other drivers they are coming through... it's actually pretty brilliant. 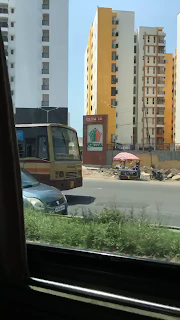 Many buildings being torn down, and new ones going up in their places. 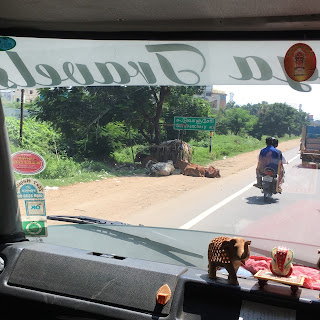 there are cows hanging out all over the place. 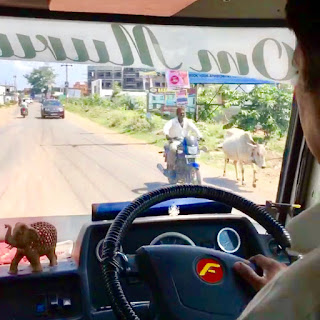 Really, cows everywhere (and dogs, goats, even a baby pig we saw running down the street!)
I wonder, "Who does this cow belong to?" Not the guy on the scooter. 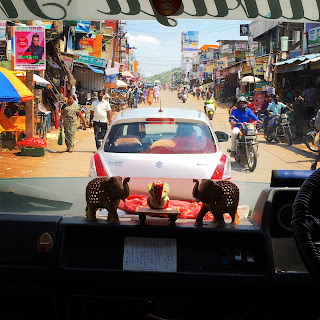 it is so, so colorful here.

I realized today that this is truly an experience that I am glad my children can have. I also realized that I love it here. It isn't always comfortable, both physically and mentally, and I am sure that tomorrow, as we go and visit with the families in the leper colonies, it will be even harder. But I am so, so grateful for the opportunity we have to be here and experience it all firsthand.
Speaking of, today is the birthday of the man making it all possible. I don't think I could love him any more than I currently do. Elliott is kind, patient, adventurous, hard working, and pretty dang good looking too (lucky me!) He is currently on his way to Singapore for three days, and we will definitely miss him!
I'm happy to say that Henry is doing much better now. Whatever bug he had in his system seemed to be gone by the time we got to the apartment in Guduvancheri. I made him some ramen and crystal light, and this afternoon he told me he felt 90% better and only 10% sick. Sure love that little guy.

This is such an amazing thing you guys are doing! I can't wait to continue reading all about it.