Just a warning: This post has little to no pictures, and is quite wordy, but I want to remember everything that we did to prepare for our trip.

About two months ago Elliott realized he was going to be spending much of the fall and winter in India. Wouldn't it be fun, I thought, for the kids and I to join him for part of the time? Yes! So without any hesitation, we decided to make it happen.

The first question pretty much everyone asked when they heard about our plan to take all our children to India for a month during fall was, "What about school?" to which I usually responded, "What about it?" To me, the experience they would have immersing themselves in the culture of India firsthand was much more educational than sitting in a classroom for 7 hours a day. Luckily we live in a school district where the educators and administrators are flexible about our point of view. We have been met by excitement as we shared our plans, and many of the teachers made extra provisions for our children to be able to keep up with their schoolwork.

Since I knew that there were only so many ancient Hindu temples I would be able to drag the kids to, and since Elliott would be working while we are in India, I knew that the kids and I would need something to keep us occupied. I shared with Elliott the idea that we could work with some type of charity for part of our time, and he reminded me of a blog post from 71toes.com that I had sent him a while ago talking about the Pothier family's experience working with Rising Star Outreach (RSO), a charitable organization that works to help leprosy colonies become self-sufficient through economic, medical, and educational outreach. We emailed them and immediately received an enthusiastic invitation to come and spend a week helping at their campus near Chennai, India.

While emailing with Amy at RSO, we wondered what types of supplies the organization might need that we could help provide for them. She mentioned some of the usual suspects, like medical and school supplies, but also mentioned that they would love to be able to buy a book for every child at the campus. Elliott and I decided we would hand the reins to Emma, so that she could run a fundraiser to be able to buy the books and supplies as one of her Personal Progress value experiences.
It was decided that she would run two fundraisers... one an on-line fundraiser, hosted by RSO, so that those that lived farther away from us could donate tax-free, and one cookie dough fundraiser where Emma would make Elliott's secret recipe cookie dough, freeze it by the dozen cookie dough balls, and sell them locally to help earn money. To say that we were overwhelmed by the response for both fundraisers would be an understatement.

Emma raised over $2,100 online, and sold 44 dozen frozen cookie dough balls, plus Elliott's dentist brother reached out to one of his suppliers and was able to get us a full-sized suitcase-full of gauze bandages, sterile masks and gloves. Thank you so much to all who donated money and bought cookie dough. We appreciate everyone so much. You have all been so, so generous!

Everything was falling into place. We already had our passports, the kids and I were eligible for e-visas, which we received within one day of applying, and since Elliott had already spent a week in India, he knew the perfect place for us to stay in Chennai before we began our work with RSO. Because Elliott would have used up the two e-visas he could get each year, his assistant began the process of applying for his long term visa. After Elliott's second visit to India, he knew more about Delhi and where we could stay while there. We found accommodations for some of the other cities we wanted to see, and began researching what types of fun activities and learning experiences we could arrange for the kids while in India.

With two days left until time to depart, clothes were beginning to be sorted and piled, awaiting their final suitcase assignment. All frozen cookie dough had been delivered, and temporary goodbyes were being said. Only one problem remained. Elliott's visa had not come through yet. Since Elliott travels so much, his passport was almost filled to capacity, and a new passport had been received. But somehow on the visa application both passport numbers had been recorded, causing confusion, and in the end the delay for the visa. The night before we were supposed to leave, Elliott received word that his visa application had been denied. This was a frustrating setback, as we were mentally ready to leave.

However, the Lord has his reasons for doing things. An extra weekend at home was welcomed and needed, and in the end, Elliott reapplied for his Visa, and was able to pick it up in NYC the day of our adjusted departure date. The kids helped me finish packing and cleaning our house, we boarded the Mercedes Sprinter that took us to the airport (and the kids now want to buy), and made it with plenty of time to spare. 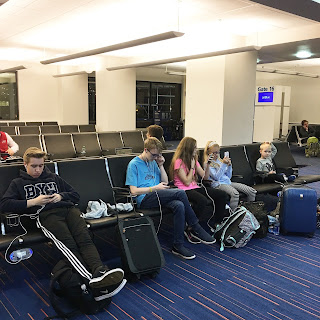